This version of Rummy, also known as Paplu, is very popular in India. It is a pastime enjoyed by all sorts of people and is played in all sorts of places, even, for example, while people are commuting to or from work on trains and busses. It is particularly popular in card rooms and casinos across India where, in certain jurisdictions, the classic original Indian Rummy game is a wagering game. Little is known about the origin and history of Indian Rummy.

It is possible that Indian Rummy is derived from the United States as it plays like a cross between Gin Rummy and Rummy 500. It is similar to Rummy 500 in that it is played with 13 cards, one or two decks, two or more players and usually jokers (wild cards). However in the overall simplicity of turn by turn play, it is a lot more like Gin Rummy, which is its closest relative. If you like Gin Rummy, you are very likely to enjoy Indian Rummy. These rules were written for an offline, real life card playing situation but they are equally applicable to various online versions which can be played with computer opponents or live players.

Cards: A single 52-card deck, plus jokers, is used for 2 or 3 players. 2 decks should be used for 4-6 players, and three decks if there are 7 or more players playing. 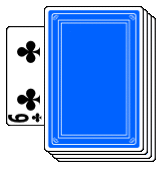 The Deal: The player to the left of the dealer draws a card at random from the shuffled deck and lays it face up on the table. Cards with the same rank as this card will be additional wild cards for this round of play. If the drawn card is a joker then only the other joker will be wild for this round.

Each player is dealt 13 cards. After the deal the remaining cards become the stock pile and it is laid over the face up wild card on the table such that the wild card’s rank is visible to all players. The top of the stock pile is turned over to be the start of the discard pile.

Objective: The object of the game is to form all your cards into sets and/or runs.

One crucial element of Indian Rummy is that your hand must contain at least two runs and if wild cards are in play, at least one of those should be a "natural" or "pure" run (i.e. containing no joker or other wild card) before you can go out. The pure run is sometimes referred to as "Life 1" or “First Life” and the second, which can be non-pure, is sometimes referred to as "Life 2" or “Second Life”. A wild card may be used anywhere, either in a Run or a Set, once you have formed Life 1. You must go out on your turn by discarding - it is irrelevant as to whether this may or may not be a card that could have been added to an existing meld.

Note that if a wild card is used as its natural value in a run then it is considered a natural or pure run. For example, if the 8 is the designated wild card then 7

is considered a pure run since the 8 is used as an 8, but J

is not a pure run.

There is no laying of melds on the table during the turn-by-turn play of Indian Rummy, as that only happens when a player is ready to go out. There is no laying off cards onto other melds at any time. The two elements of a players turn are simply the Draw and the Discard.

Discard: After drawing, the player must examine his or her cards and decide which one is the card he or she needs least. It will be a card that is probably not in sequence with the rest or is the only one of its kind making it impossible to form either a Set or a Run. The player then takes this card and places it on the discard pile, face up.

The Ace can be either high or low in runs, but not both. In other words, A

are valid runs, but K

A player whose hand is unpromising may prefer to withdraw from the game to limit the amount lost. This is called packing or dropping. It can only be done at the start of a player's turn, instead of picking up a card.

A player who packs at the start of his first turn, before before drawing any card from the stack or discard pile, pays 10 points to the eventual winner. The player's 13 cards are shuffled and placed at the bottom of the face down stack, so that they are eventually available for drawing by the other players if the game continues that long. The remaining players continue to play.

A player who packs at a later turn must pay 40 points to the eventual winner, if any. This player's cards are not added to the stack, they are set aside face down out of the game.

If all players except one have packed, the last remaining player automatically wins, and immediately collects the appropriate amounts from the players who packed.

When a player has organized their cards into runs or sets, has at least 1 natural or pure run (First Life) and has at least one other run, then he or she is able to declare Rummy and wins the hand. This is done by laying all his or her melds on the table and discarding the final card. At this point the other players display their melds and their deadwood is counted up and scored appropriately.

If a player does not have any natural runs then all cards are considered as unmatched and any other meld is invalid.

Cards have the following values:

If a hand contains a pure run (the first life), the cards of this run are not counted.

If the hand contains a second run (second life) as well as a pure run, cards in these runs and any additional runs and sets are not counted.

The values of all remaining cards (deadwood) are totaled and the points are paid to the winner. Packed players pay the winner either 10 or 40 points, depending on when they packed.

If a player declares Rummy after picking a card for his first turn, any other players who have not yet had an opportunity to pack or pick a card pay for their unmatched cards at half rate - that is the total value of their cards that are not in valid combinations is divided by two.

In the rare event that a player is dealt a hand of 13 cards that are all connected in compliance with the rules, the player can declare “Hand-Rummy”. Hand-Rummy is declared at the player's first turn, instead of picking a card. Any players who have already taken their turns and have chosen to play must pay twice the total value of their unmatched cards. Those who have already packed pay 10 points as usual,and any players who have not yet had a turn pay for their unmatched cards at the normal (single) rate.

Additional rounds can be played until a certain number of rounds, or a time limit is reached, or until a predetermined score has been reached by a player.